The Schwab Foundation, which has been a key organizing body behind the World Economic Forum annual meeting in Davos for the past thirty years, has, for the past decade, begun to emphasize social entrepreneurship. Beginning this year they have broadened beyond identifying leading individual social entrepreneurs to focus on the larger “social innovation ecosystem,” which also includes social innovators within large organizations as well as “global thought leaders” in social innovation. Peter was selected as one of the initial thought leaders last year, along with Julie Battilana of Harvard, Marie Lisa M. Dacanay of the Institute for Social Entrepreneurship in Asia, Cheryl L. Dorsey of Echoing Green, Fadi Ghandour of Wamda Capital of Jordan and Lebanon, Filipe Santos of Católica Lisbon School of Business and Economics, Christian Seelos of Stanford, Roberto Unger of Harvard Law School, and Frances Westley of Waterloo University. Peter was given an award at the Schwab Foundation Annual Summit in New York in September, organized in conjunction with the United Nations General Assembly week. 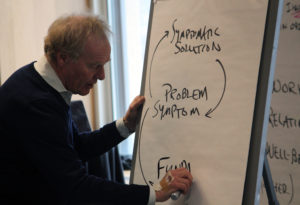 Below, we include the official announcement from September:

Peter Senge, fellow of the MIT Abdul Latif Jameel World Education Lab (J-WEL) and senior lecturer in the MIT Sloan School of Management, has been recognized as a 2019 Schwab Foundation Social Innovation Thought Leader of the Year. With this honor, Senge joins an esteemed group of thought leaders in a world-class three-year program, during which his work on social innovation will be showcased globally.

An internationally recognized leader in systems thinking and organizational learning, Senge works to advance diverse learning communities, including the Sustainable Food Lab and, most recently, the Compassionate Systems Network comprised of primary and secondary educators around the world. The Network aims to incorporate the Compassionate Systems Framework into pK-12 education for 21st century educators and learners, integrating systems learning, social-emotional learning, and mindfulness into schools. Senge and J-WEL Affiliate Mette Miriam Boell developed the framework to support pK-12 students and teachers to build a “cognitive and affective foundation for global citizenship,” preparing them to apply these skills to solve global systemic challenges such as climate change and sociopolitical crises with compassion.

“Peter has been at the forefront of organizational learning for nearly three decades,” said Vijay Kumar, associate dean of digital learning at MIT and executive director of J-WEL. “Today, he plays an integral role in J-WEL’s mission to advance positive, systemic changes to shape the future of learning.”

Senge is the founding chair of the Society of Organizational Learning (SoL), and co-founder of the Academy for System Change, which works to accelerate the growth of the systemic change field worldwide, and most recently the Center for Systems Awareness focused on cultivating Compassionate Systems thinkers globally in primary and secondary education.

In 1990, Senge authored The Fifth Discipline, a bestselling classic with more than two million copies sold worldwide. The book was recognized by Harvard Business Review as “one of the seminal management books of the last 75 years,” and by Financial Times as one of five “most important” management books. Senge is also co-author of several related field books, as well as Presence and The Necessary Revolution. The Journal of Business Strategy named him one of the 24 people who had the greatest influence on business strategy in the 20th century.

Senge believes that “deep societal and ecological imbalances that have built up over generations will not change in a few months or years, and problems that have their root in collective ways of living will not be solved by heroic individuals.” Thus, his current work focuses on fostering a cross-sector understanding of complex issues and collective leadership for healthier human systems. His works spans government, healthcare, business, and education, and embodies the idea that common principles and practices for developing leadership at all levels can enable system change in diverse domains.

The Social Innovation Thought Leader of the Year award is issued by the Schwab Foundation for Social Entrepreneurship, which, in partnership with the World Economic Forum, is a leading global platform that accelerates models of social innovation to scale solutions and support people in need.

The Schwab Foundation for Social Entrepreneurship is an impressive network to be part of, and conversations are already ongoing with many potential partners – for example, for our work in Indonesia.